I miss the clickety-clicking of paws on the hardwood floor when I walk in the door. I miss seeing the sad eyes begging for pizza crusts on pizza night. I miss my canine Hoovers–Now I have to vacuum crumbs off the floor for myself. There’s too much room in our bed at night without those guys hogging all the space. There’s no one there for belly rubs. (Trust me, the cat’s an asshole about that.) Something is missing in our house.

When you spend 12 years sharing your home-your life-with two giant dogs, something is missing when they are gone. It’s not just the sadness that surprises you. After all, they were just dogs. But that’s not exactly true, is it? My dogs taught me about kindness and the gentleness of a soul. When my husband brought home Maggie, an 85-pound pit bull mix, from the animal shelter, she opened our eyes to the pain, suffering and loneliness that many animals in the world experience. We looked into her eyes and wondered how a human being could let themselves be responsible for such suffering. She is the reason that my husband and I started our journey to become vegans.

Maggie was our first; a loving, free spirit of a dog. She was gentle with everyone even though she was big enough to knock most people over. The first night we had her in our home, I was afraid of her. I was raised with small dogs and didn’t quite know what to do with this giant beast. I made my husband keep her on a leash that whole first night because I was afraid she was going to…what, I don’t really know. After about ten minutes on that leash, that ferocious beast was curled up on my husband’s chest and they were both fast asleep. Lesson learned, Maggie.

A year later, we thought Maggie would like a friend, so we found Remy, another pit bull mix. He was a smaller, fuzzier version of Maggie. He was a stray, found roaming the streets of New York City. A real tough guy, he looked like he was always ready for a fight. But in reality, he was a marshmallow. His favorite pastime was sleeping. I mean, he slept 23 out of the 24 hours. A real professional.

When we brought Zoey home from the hospital the first time, we worried how the dogs would react to this little squeaking stranger intruding on their lives. It was love at first sight. One sniff of her in her car seat was all it took for both dogs to become her guardians and playmates. And as she grew, she became their food source. When Zoey was about three, she couldn’t figure out why Maggie kept chasing her around the house. And Maggie couldn’t figure out why the little squeaker kept running away with HER bagel.

Maggie left us first in the winter of 2012 and Remy followed her about a year later. We all felt the devastation of those losses. We still do. When will I stop expecting to be greeted at the door by Remy, holding one of my sneakers in his mouth? There is definitely something missing in our house. There is a sense of quiet that was never there before. I didn’t realize how much I talked to them until they weren’t there to listen.

How do you fill that hole? How do you comfort your child who still, after a year, cries that she misses her dog, when you feel the sadness still too? I never thought I would miss a dog this much. I always thought that when one pet left, another would be there to take its place. But it’s not that simple. I see that now. So for now, I’m going to let that hole stay empty. 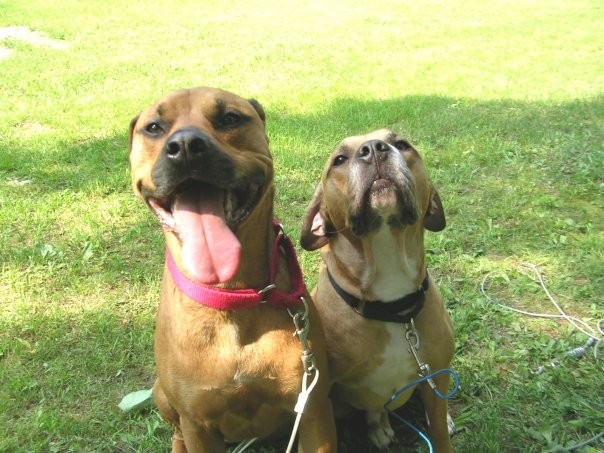