Bullying: The Next Generation

By rfmezzy in Uncategorized on June 3, 2014
5 comments

It seems the price that moms must pay for raising a sweet, gentle child is that you will have to experience his being bullied.  Bullies have radar for the kids who are innocent and nonviolent.

How do I know this?  Well, I am an expert based on my vast years of experience raising two gentle boys.  I thought all of this was behind me but I was wrong! Last week, I went to the playground with grandson Little O, who is 21.5 months old.  He loves slides and steering wheels and all the other activities that these town playgrounds feature.

This particular play structure was huge and winding.  Many of the slides were for older kids, but we eventually found the one for kids aged 21.5 months to 5 years.  The only problem was that if I helped Little O get on the slide at the top, there was no way for me to get to the bottom to catch him, other than leaping off a ledge that was about 3 feet off the ground.  So of course I did it, but not before banging my head on the top of the structure.

I decided I would just lift Little O from the ground to the top of the slide, so I could stay on the ground, ready for when he slid down.  The dear little guy weighs 35+ pounds, as he is a thriving, growing lad with tall parents.  I have arthritis in both my hands, but I transcended that and lifted away.  It was worth it to see him having so much fun.

I lifted him to the top of the slide several times, but after a few successful slides, he decided to abruptly turn and walk away to check out another area.  ACKKK!  There was no way for me to get back into the structure, other than returning to that ledge and – OMG – hoisting myself up.  I am a person without any physical grace or athletic abilities.  I am happy if a day goes by in which I don’t trip and fall.

So I was getting myself positioned to hoist onto the structure, happy I could still see Little O, who was about 5 feet away banging on some musical thing.  He turned and started to walk down another path.  I called his name, but of course he didn’t feel like responding.  I was panicking at the thought of him disappearing from my view, when all of a sudden, a child’s arm shot out and pushed my grandson to the floor of the structure.

Miss Meyers, the gym teacher who tried in vain to get me to climb the ropes in high school gym, would have been proud.  I jet-propelled myself from the ground onto the 3 foot ledge (banging my head AGAIN in the process) and scrambled back onto the structure in hot pursuit of the owner of that pushing arm.

By the time I got there, a little girl was already comforting my grandson, and I could not see the perpetrator, who wisely ran away.  Little O was unhurt, thank goodness, but the look of surprise and bewilderment on his face stabbed me in the heart.  He has had some experience with mean kids at daycare (who BITE!), but obviously, he has not become used to it.

In about 30 seconds, he was off and playing, happily running up and down the structure, with me right behind him, looking out for dangerous hooligans.

But it all came flooding back – the years of bullying of Little O’s dad and uncle.  I remember being at a kid’s birthday party, in a backyard with a pool.  My son was in the pool, having fun, and swam over the side, holding on to the edge with his fingers.  I was chatting with the other moms, and turned my head to see the birthday boy STOMPING on my son’s fingers so he would have to let go of the ledge.

OK, freeze this frame for a moment.  I was a very young inexperienced mom.  The birthday boy’s mother was standing right there, not doing A THING about her evil son.  What would you do?  Smack the little perpetrator? Take him aside and explain that it’s not nice to stomp on people’s fingers, particularly when they are in the deep end of the pool?  Go to his mother and demand she take some action?

I did none of these things, gutless wonder that I was.  I went over to the pool and asked my son to get out.  That was one way of ending the finger-stomping!

Over the years, my kids were beaten up, teased, had things thrown at them on the school bus, and endured numerous other things I have repressed.   Eventually I grew a pair and stood up for them, mostly by going to the school and demanding some supervision.  How does a kid get beaten up or have chocolate rubbed in his hair without a teacher noticing?  Mr. Taylor, the vice principal of the middle school, and I developed a close relationship based on my frequent visits to his office to demand action.

During the Bullying Era, I asked my male co-workers what they thought I should do.  I work in a legal aid organization staffed by children of the 1960s who marched for peace and protested against the Vietnam War.  To my great surprise, each colleague said the same thing: “Tell your son he HAS TO BEAT THE CRAP out of the other kids!”  So much for peace and love.

Of course I couldn’t endorse retaliatory strikes.  But at least my kids knew I would defend them and try to get someone in authority to DO something about this meanness.  I learned my lesson after the Finger Stomping Incident.

Had I encountered the owner of the arm that pushed my grandson down, I would have told him sternly that it’s not nice to push other children, and asked him how HE would feel if someone pushed him (children are not naturally empathetic – they don’t easily come up with “how would I feel” on their own).  If his mother and father were around, I would have chastised them as well.  I would have said, “You need to teach your child not to push little babies to the ground!  This playground is for ALL children and no one has the right to push anyone away from an activity.”  I would have wanted to say, “It’s not too late to straighten out your little delinquent and avoid having his picture on the post office wall,” but I probably would have said that only to myself. 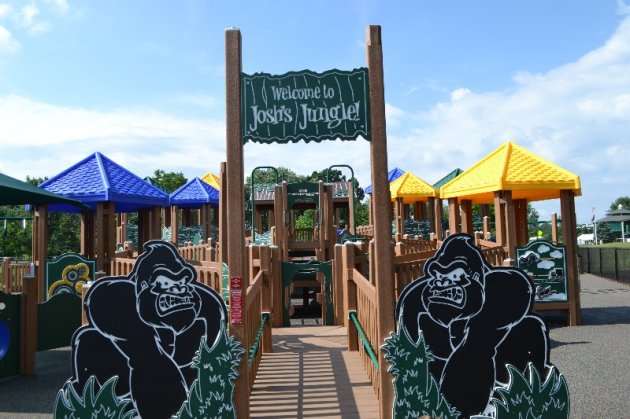 Is it my imagination, or are those mean gorillas plotting to mess with my grandson?

Moms, have you experienced this yet with your little ones?  Do you have a strategy ready?

View all posts by rfmezzy

5 comments on “Bullying: The Next Generation  ”