By taraolson1 in Uncategorized on February 11, 2015
9 comments

Having a daughter has raised my awareness of women in the media. Women selling things. More focus on pretty than strong. There’s nothing wrong with pretty, by the way. I’m not writing this to chastise anyone. But I often think about this question: What do I want for my daughter in terms of confidence, health, goals, motivation? But more importantly, what will she want for herself and how do I promote positive ideals and habits?

The topic of body image could start a war. So I won’t go there. And I’ll never be able to fight Hollywood, the media, or the common consensus. But I can turn off the TV and walk by the magazines in the grocery store check-out without flipping through them. This is my choice. Because I don’t give a shit what Kim Kardashian is doing or wearing or selling. And if I don’t like it, I don’t engage. I’ll support those that make ME feel strong, the people that inspire me. 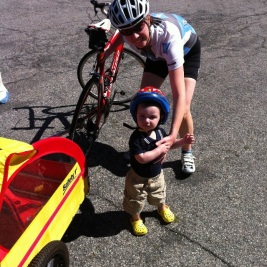 Personally, I think it’s important to go to the gym with the intention of not only trying to look good in a bathing suit, but to get strong. Honestly, I’m fairly sure that getting into a bikini is not in the stars for me, and that’s fine! And if your singular goal is wearing that bikini, well more power to you! (Truth be told, I’d be OK with not looking atrocious in a one-piece.) BUT … what I really love and truly achieve in my workouts is to see what I am capable of. To set goals and push myself. To get stronger — physically and mentally.

I don’t think that women in advertising, on TV, or in magazines who are selling images of submission, stereotyped feminine weakness, or vanity have a responsibility to be role models for me or my daughter. And I don’t have to allow them to be representative of all women in my world. But those images are everywhere!, some may say. Sure. I suppose they are. But depending on where you look, there are plenty of positive people to admire and be inspired by. Regular people. Real people. 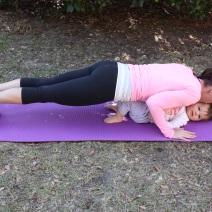 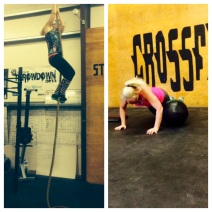 I’ll never be able to shield my daughter from media images. And I don’t want her to be resentful, jealous, or angry at these images, these pictures; but rather, I want her to be able to view them realistically. Because that is what they are: they are pictures, images. They are doctored, Photoshopped. They are advertisements. Really though, everyone is selling something, right? And it’s impossible to shut down the industry. Even “updating” the bodies that flood the market isn’t worth all that much to me. Because they’re still just pictures. Where is the power and strength and movement behind someone finally “earning” a place in a bathing suit magazine? Yeah, thanks but no thanks. These ideals of beauty don’t speak to me. They don’t motivate or inspire me. 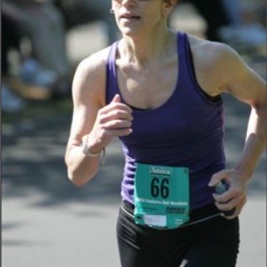 As I see it, fighting negative with negative is a losing battle. Instead, I chose to close the magazine, turn off the TV, and stop competing with images … to stop feeling inferior to edited pictures. Today I choose to promote what I perceive to be positive and strong. I prefer to flood the internet with pictures of tenacious, athletic, inspiring, healthy women. Real women. My daughter knows that I exercise not because I want to be skinny, but because it makes me healthy, means that we can participate in races, and makes us better at sports. And because we can have FUN doing it.

Call them humble brags or call it showing off, but I totally dig those posted pictures of my friends and acquaintances sweating, agonizing, flexing, killing it, feeling proud of an accomplishment. They inspire me, motivate me, make me proud of them, and proud of myself. It’s not about the physique; it’s about the strength and the pride. There’s real beauty in true happiness and self-acceptance. So let’s see you sweat. Wear your bib proudly or flash that hardware. Show off your Workout of the Day, Cross Fitters. Snap a pic of the miles you put on your Garmin. I mean, look at these smiles. You ladies are beautiful.

I’m a sucker for a message, not a sales pitch.

View all posts by taraolson1