Looking a gift horse in the mouth

By kmcgomez in career, Exercise, fall, General, happiness, pets, Reflections, self-care, Stress, Who I Am., Work-Life Balance on November 11, 2018December 12, 2018
No comments 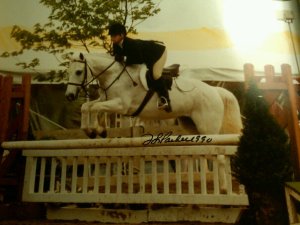 I first discovered the magic of horses at five years old, and, as the saying goes, we were off and running. By age seven, I (literally) landed my first pony-related concussion and sutures.  Undaunted, I climbed back into the saddle the moment a doctor gave the OK.  My parents were initially in some form of denial about the seriousness of my obsession.  When other kids came home from sleepaway camp with friendship bracelets and mosquito bites, I showed up with a camp pony…  He had, I explained, no home lined up for the winter, so bringing him to mine was the only option.

Although many things in my childhood changed year to year, one thing remained constant: my love of all things equine. Every free moment I had was spent at the barn.  I reveled in the sounds and smells, trying desperately to be useful, and throwing my little spongy self at every drop of information casually tossed in my direction.  Each time the alarm clock rang at 3 am to get up and go to a horse show, I leapt out of bed, energized.  Never a super competitive person, I delighted in the experience of taking what we practiced at home and translating it into different environments.  Winning was icing on the cake.  Apparently I also liked to go much faster than Children’s Hunter classes required, as my first trainer’s nickname for me was Mario Andretti.  Horses meant much more to me than a route to horse show success.  My main source of happiness came from making a connection with a 1000 pound animal, building trust, and developing a relationship.

A wonderful group of people and animals figured prominently in my early riding years, none more important than my first horse Teddi.  He was a racetrack reject who trotted casually out of the starting gates despite the jockey giving it his all.  Both young and green when we were first paired up, our individual and combined inexperience somehow never got in the way.  My teacher Dolores had gotten Teddi right off of the track and brought him along herself, and she’d taught me since I was a little peanut, so she knew how we both ticked.  In the years Teddi and I spent together, we reached all of our goals, and accomplished more than I had dreamed possible.  Even more miraculous: neither of us ever got hurt. Despite appearing sturdy and solid, horses are shockingly fragile.  My friend Ashley, a veterinarian, once described them as “anatomically incompatible with life.”  It is no secret that I’m not the most, uh, *graceful* person, so tumbling from a horse was not an infrequent occurrence in my early life.  I had Teddi for nearly seven years, though, and never once got dumped in the dirt.  During that time I did of course fall off of every other horse and pony in the tri-state area, but Teddi was such a steady, mellow sweetheart.  He took amazing care of me. 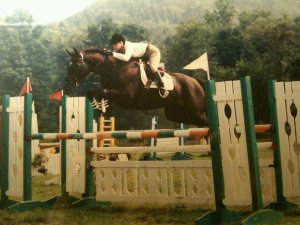 Many lovely horses graced my life throughout high school and early college, and in my mid 20s I was lucky enough to have a short stint teaching at a pony farm outside of Philadelphia.  Dogs filled the 4-legged hole in my heart, and as I became more citified and career-oriented, there wasn’t much time or opportunity to ride.  After settling back in Connecticut, I did get to school some naughty ponies, but horses were not (nor are they ever likely to be) in the budget.  Although I accepted this, the saddle I’ve had since I was 13 stayed in its carry bag, year after year, waiting to be paged into service.

Through some twist of small-world fate, a local riding instructor and surgical tech from our dogs’ emergency veterinary clinic left this September for graduate school.  She has somehow entrusted me with looking after her wonderful horse Sheldon while she is away.  He is named after Sheldon Cooper from The Big Bang Theory, and definitely bears many similarities to his prime-time namesake. Colleen bought Sheldon as a three year old, and his early antics earned him a reputation as the barn’s resident bad boy.  We did fine when I first rode him, and I exercised him over the summer so we could start getting to know each other before she left.  Still, the day of her departure I was seized with a bout of cold fear.  What was I trying to prove getting back on a young horse at 42 years old?  What if he got hurt?  What if I got hurt?  Shit, what if we both got hurt?!  Also: where does this thing buckle, why can’t I get him to step into the wash stall, which door is the actual entrance to the indoor ring, and does he canter sideways on purpose?!

After a few weeks, we fell into a natural routine and I began looking forward to barn time with an enthusiasm I didn’t know I still had the capacity for.  Sheldon is smart, sensitive, and silly.  He is never exactly the same ride two days in a row, which is part of what makes him so awesome.  I’m a mom who has never allowed myself me-time (whenever I tried, I’ve felt too guilty to enjoy it), but picking up the reins forces me to put my phone down.  While never unmanageably wild, Sheldon is just challenging enough that I have to pay attention and be present.  He’s an affectionate imp, and super stinking cute.  Somehow he has also turned into a local goodwill ambassador.  Friends, kids, my niece, and even my dad have come to visit the dude and delighted in his good nature and puppy-like playfulness.  As a horse who loves to be fawned over, the constant stream of admirers suits Sheldon just fine.  Over the past several months, I have gotten to know him up close, and his owner Colleen from afar – leading me to realize that Sheldon is her Teddi.  They have grown up together, and in doing so grown into each other.  This only makes spending time with him that much more special to me.  I am so grateful for all the lessons this beautiful boy is teaching me, and for the opportunity to be part of his most excellent adventure. 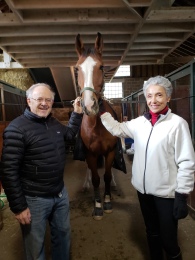 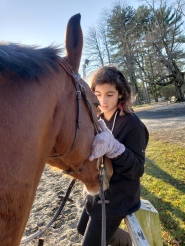 Karen Mickley-Gomez is an RN, Registered Yoga Teacher, Francophile, horse lover and Cocker Spaniel rescue advocate. She works as a hospice nurse, and lives in Easton, Connecticut with her husband Jeff, stepdaughter Lilia, son Timotéo, and an ever-evolving group of adopted and foster dogs. View all posts by kmcgomez